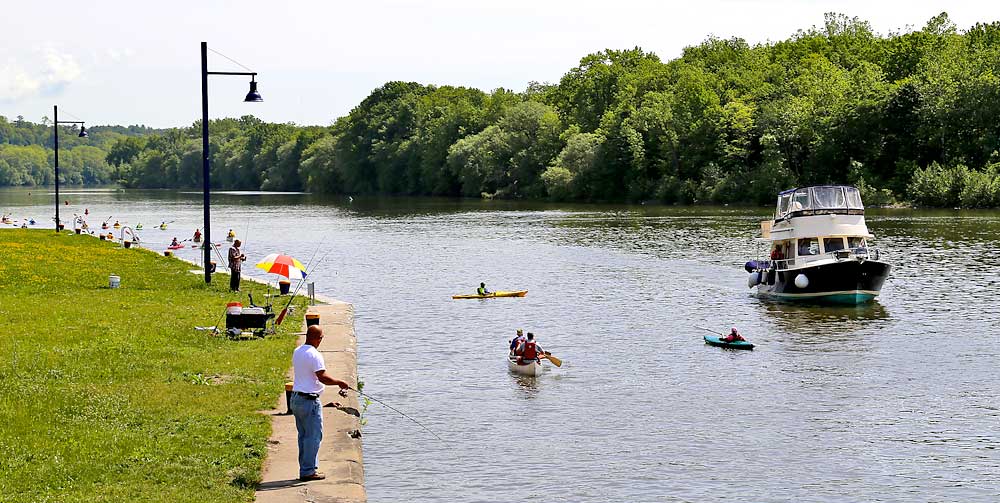 With one truly great lake, another body tied to American lore and an unrivaled Adirondack fishery, Central New York is arguably the heart of water recreation in the state.

Anglers, paddlers and boaters soak in some of the most productive waters and scenic views New York has to offer here.

With 80 square miles of water sandwiched between two sections of the Erie Canal system, Oneida Lake is the hub of water culture in Central New York. Water from over 80,000 acres in parts of five counties flows into Oneida, renowned for its bounty of walleye and perch since the 1940s.

Bass is beyond a favorite sport fish here as the pros have made the lake a B.A.S.S. and Fishing League Worldwide (FLW) tournament stop over the years. The waters that also earned inclusion as a top 10 North American fishing hole in Bass Pro Shop’s “The Strike” video game.

Dozens of charters and marinas signal Oneida Lake’s exceptional environment for not only fishing, but water recreation as well. Boaters tend to spend entire days touring the lake, stopping for a bite or beach break along the way.

Tributaries like the appropriately named Fish Creek offer miles of public access for fishing, making this area a popular spot for trout. About 40 miles to the east, West Canada Creek may be the top fly fishing destination in the region.

Take a Fishing Vacation on the Fly

“There are zero tail-water fisheries in the Adirondack Park or near the Adirondack Park that offer 99 miles of trout fishing” like West Canada Creek does, said JP Fly Rods & Co. Founder Jordan Ross. His handmade rods and reels have attracted anglers for more than two decades.

Well-stocked with brook and brown trout, the West Canada Creek carries its own allure. Ross’ Trout Power initiative is working to increase the numbers of wild species with more environmentally friendly management of hydropower dam flows, which he believes would put it on par with blue-ribbon fly fishing spots like New York’s Ausable and Delaware rivers.

The creek as it stands is well known among anglers, kayakers and canoers who live nearby, but a hidden gem easily overlooked by visitors.

The Lake of Legends

Out-of-towners don’t have to look very hard for Otsego Lake, the aquatic centerpiece of the Cooperstown area and key character in the work of famed American author James Fenimore Cooper.

Cooper dubbed it “Glimmerglass” in his Leatherstocking Tales, a name that has stuck with a popular state park and renowned opera music festival on Otsego’s shores. One of Central New York’s largest lakes and source for the Susquehanna River, Otsego is also well known for its lake trout, walleye and bass fishing.

Visitors can cap off a day on this seven-mile stretch of water with a campout at Glimmerglass State Park, home to attractions like Hyde Hall Mansion, Covered Bridge and self-guided tours of the Beaver Pond Nature Trail.

The historic Otesaga Resort Hotel is famous in its own right for luxurious lakefront accommodations and its neighbor, the Leatherstocking Golf Course.

Outdoor recreation near Utica and Cooperstown revolves around water, but isn’t limited to the currents and waves. Central New York is a place where anglers, boaters and fun-seekers can craft their own adventure. Just follow the creek, river or road to your next summer vacation experience.